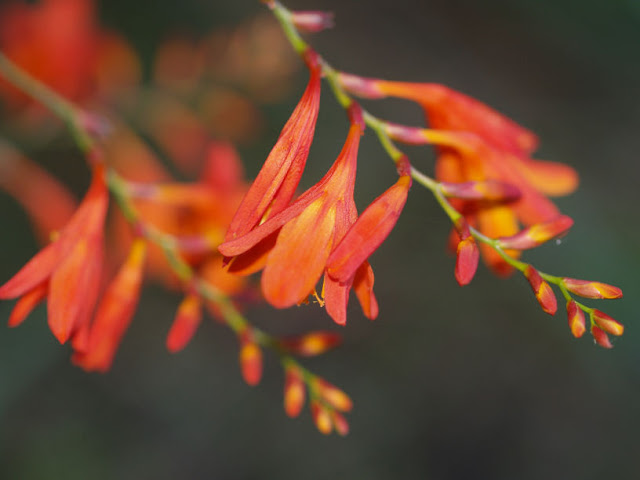 Last Saturday it was searing hot (36C). How quickly things change, after a week of rain it is chilly (12C) and the perfect time for weeding now the soil is nice and damp. I spent several hours in the rain pulling out privet and pittosporum seedlings hiding among the azaleas on the bank.
I photographed this pretty Montbretia a week or so ago when the sun was shining. Despite its beauty, it is a card carrying weed. As a Class 4 noxious weed it must be controlled and the plant may not be sold, propagated or knowingly distributed. This last remnant escaped my eradication programme. Such a shame to pull them out, but if I don't they march across garden beds and through the neighbour's fence.
Reflection:
Matthew 13:24-30 (New International Version) The Parable of the WeedsJesus told them another parable: "The kingdom of heaven is like a man who sowed good seed in his field. But while everyone was sleeping, his enemy came and sowed weeds among the wheat, and went away. When the wheat sprouted and formed heads, then the weeds also appeared."The owner's servants came to him and said, 'Sir, didn't you sow good seed in your field? Where then did the weeds come from?'" 'An enemy did this,' he replied."The servants asked him, 'Do you want us to go and pull them up?'" 'No,' he answered, 'because while you are pulling the weeds, you may root up the wheat with them. Let both grow together until the harvest. At that time I will tell the harvesters: First collect the weeds and tie them in bundles to be burned; then gather the wheat and bring it into my barn.' "